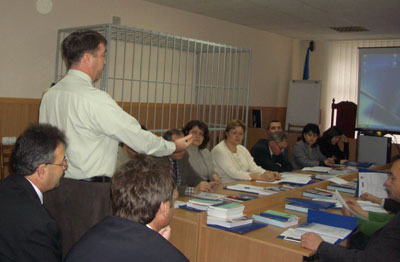 On March 11, Moldova enacted its first legislation to protect women from domestic violence. The ABA Rule of Law Initiative (ABA ROLI) provided key commentary and input to strengthen and improve the law during the drafting phase. USAID recognized ABA ROLI’s significant involvement in the legislative process by highlighting this work on itswebsite.

Surveys show that more than 40% of women in Moldova have been victims of a violent act at least once in their lifetime.  What constitutes domestic violence is now defined in Moldova by law and is designated as a crime with appropriate punishments for perpetrators.

In anticipation of the law’s enactment, ABA ROLI also developed and continues to sponsor a legal aid program for domestic violence victims.  The program is based in a domestic violence shelter in Moldova’s capital city, Chisinau.  It provides free legal services to victims and conducts “know-your-rights” and awareness trainings, both in the shelter and in the rural regions of Moldova.

ABA ROLI’s Legal Specialists also collaborated to develop a training curriculum based on the new law for prosecutors and judges.  To date, 35 judges and prosecutors have participated in these trainings, which have been held in Chisinau and the outlying regions with the cooperation of the Organization for Security and Cooperation in Europe (OSCE) and the Moldovan National Institute of Justice.

The National Institute of Justice has recently requested that ABA ROLI schedule more regional trainings for judges and prosecutors on domestic violence and plans are underway for additional trainings in May.  ABA ROLI is pleased to continue its support and assistance to Moldovan authorities and to its civil society partners to combat domestic violence and to aid and protect the victims of such violence.