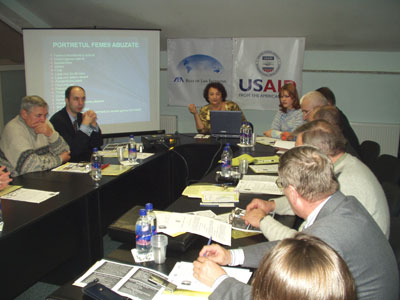 In December 2007, the ABA Rule of Law Initiative (ABA ROLI) organized a round table in Moldova focusing on how existing legislation can be used to help victims of domestic violence, a recognized problem in the country.  Two legal professionals and a psychologist with expertise in issues of gender-based violence led the round table and more than 20 people attended including: journalists, ABA ROLI’s Traveling Lawyers, Winrock International’s regional lawyers and law students from ABA ROLI’s legal clinics.

According to UNICEF, more than a quarter of Moldova’s women over 15 years of age have experienced domestic violence. In March 2007, the country’s parliament passed a draft law on Preventing and Combating Domestic Violence. This law will, among other things, set up rehabilitation centers and provide support services for victims.

Given the timing of this legislation, ABA ROLI teamed with Winrock International’s to include this roundtable in their campaign called “16 Days of Activism Against Gender-Based Violence.” This event was widely covered by Moldovan mass-media, including Moldova 1 TV, Radio Moldova, and the INFOTAG news agency. At the round table, participants learned about the draft law and about the existing legal procedures to protect victims of domestic violence in criminal cases, noting both strengths and the weaknesses.

While members of round table acknowledged the shortcomings of the current legal framework, they agreed on the importance of fully understanding the law.  After the round table, Ocnita-based traveling lawyer Gheorghe Ababii recognized that “even if Moldovan legislation is currently incomplete and imperfect, we need to know all the available legal tools to fight the domestic violence that plagues our society.”

Aside from the law, participants also learned about the social, cultural, and psychological roots of domestic violence and about its impact on Moldovan society.  As one of the trainers, Lilia Gorceag from the Rehabilitation Center for Victims of Trafficking, noted, “It is important for lawyers to have a better understanding of the cultural and psychological roots of domestic violence to ensure that the legal system deals with the roots of the problem and not just its consequences.”