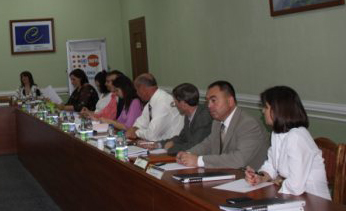 In September, the ABA Rule of Law Initiative (ABA ROLI) continued its anti-domestic violence work in Moldova by partnering to provide a training session on mechanisms and procedures under the law on domestic violence. The two-day training was organized in conjunction with the National Institute for Justice (NIJ) and the United Nations Fund for Population (UNFPA).

Participants were trained on new procedures relating to Moldova’s Law on Preventing and Combating Domestic Violence, which was passed in March of 2007.  New mechanisms now allow legal professionals to more efficiently enforce protection orders which are issued to safeguard victims of domestic violence.  A portion of the seminar also highlighted those institutions and organizations that can provide assistance to victims of domestic violence in Moldova. The procedures for appearing in front of international judicial bodies charged with addressing gender discrimination, such as the European Court of Human Rights, were also discussed. Presenters included representatives from the Ministry of Internal Affairs, the Ministry of Social Protection, the Supreme Court of Justice, the General Prosecutor’s Office and local lawyers. United Nations Special Rapporteur on Torture Manfred Nowak served as guest speaker.

The 35 participants included non-governmental organization representatives and judges, prosecutors, and lawyers from five Moldovan regions (Anenii Noi, Soldanesti, Rezina, Grigoriopol and Ribnita). They received copies of the domestic violence law, relevant commentary to the law, proposed amendments to the procedural and material legislation (awaiting approval by Parliament), sample European Court of Human Rights domestic violence cases, and a draft judicial guidebook on the implementation of the domestic violence law which is currently being developed by ABA ROLI and UNFPA. In addition, participants received electronic versions of all training materials to allow for sharing with colleagues.

ABA ROLI organized two similar trainings for judges and prosecutors at the NIJ in June 2009, both of which further prepared the legal profession to protect and to seek justice for victims of domestic violence.

To learn more about the ABA Rule of Law Initiative’s programs in Moldova, contact rol@staff.abanet.org.