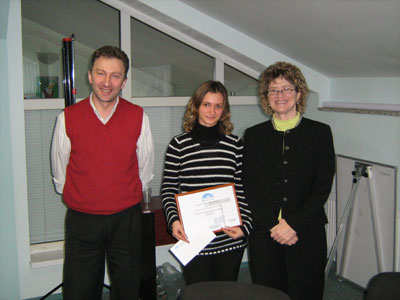 Alena Terzi, from the Comrat Legal Clinic, receives her certificate from Emil Darii and Leslie Reed of ABA/ROLI

The ABA Rule of Law Initiative (ABA ROLI) has helped develop four legal clinics in Moldova that not only teach students practical trial skills, but also provide the public with much-needed access to scarce legal services. To collect a sample of the kinds of successful work that the clinics support, ABA ROLI sponsored a competition, asking students to submit an essay describing an accomplishment or achievement in their clinic experience.  The winner, Veniamin Tarita of Balti Legal Clinic, and runners-up Tatiana Chilari and Alena Terzi, all shared examples of how the clinics are sustaining a beneficial partnership between the students and their communities.

Veniamin wrote about a case in which a widow was deprived of her legal inheritance due to a forged will.  The will was submitted to the authorities by the widow’s sister-in-law and it bequeathed all of the deceased’s property to the sister-in-law’s daughter.  The first court ruled against the widow and upheld the forged will, causing the widow to seek the assistance of the Balti Legal Clinic.  With Veniamin and the clinic’s assistance, the widow was able to persuade an appellate court to re-evaluate the evidence. The case not only resulted in a ruling from Balti Court of Appeals that the will was invalid, but prompted the authorities to press criminal action against the sister-in-law and the witness who supported her false allegations at the trial level. A tremendous success for any lawyer, this outcome was remarkable for a law student who was providing free legal services.

Tatiana Chilari, also from Balti legal clinic, won a paternity case where she obtained support for her client’s four children. She managed to do so despite strong opposition from the father, who was married to another woman and did not want the existence of his “extra” family to be exposed.  Tatiana and the clinic helped the client establish paternity for all four children and persuaded the court to require the father to pay all of the client’s court costs, including the cost of each paternity test, a substantial sum in Moldova.

Alena Terzi, a student at the Comrat Legal Clinic, wrote about a property dispute case.  Alena and the clinic successfully overturned a trial court ruling which had allowed a neighbor to build a home extension into the clients’ property. This became a real problem for the client and his family, especially as it prevented them from storing needed fruits and vegetables and deprived them of the full use of their kitchen.  Not only did the appellate court overturn the lower court decision, but it ruled that the neighbor had to demolish the offending structure.

ABA ROLI is proud that its support has enabled the clinics to provide students like Veniamin, Tatiana and Alena with practical skills and confidence in their legal experience. ABA ROLI would also like to congratulate the clinic directors and supervising attorneys who make such success stories happen every day.