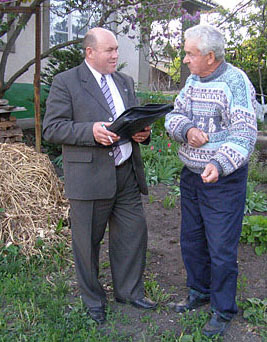 Corrupt agricultural companies now abound in Moldova.  They target elderly villagers who have small plots of land but no other resources except their meager pensions. These “corporate sharecroppers” frequently take advantage of villagers, using land leases that lack basic elements of fairness. Often, the companies fail to honor their payment obligations, which is what happened to 200 villagers in Moldova’s Orhei region who were never paid the wheat crops they were due as rent payments.

In February 2007, Traveling Lawyer Valeriu Covas visited Chipirceni to give one of his free weekly consultations.  A villager asked for help to recover the wheat crop owed to him as payment when he leased his land to an agricultural company.  After investigating, Mr. Covas determined that this same company had failed to pay 200 villagers the wheat crops they were due as rent payment.

“The company thought it could take advantage of the villagers, who don’t know how to protect their rights.  It used a lease that did not even contain its address or the name of its director,” said Mr. Covas.  As a result, when the company failed to give the wheat to the land owners, they were not able to find the company or its director.  Mr. Covas filed a complaint with the district prosecutor’s office in order to force the company to pay.  The prosecutor located the company’s director, who agreed to give the wheat to the villagers rather than face the lawsuit.  The company has already given 28 tons of wheat to the villagers. One villager represented by Mr. Covas said, “Thanks to the traveling lawyer, we got the wheat payments we were owed.  We need these crops.  Now, we have 28 tons of wheat to use for food and sell at the market.”

Since 2001, the Traveling Lawyers Program has provided legal services to approximately 15,000 people in villages throughout Moldova. With monthly stipends and training from the Rule of Law Initiative, the Traveling Lawyer Program makes it possible for seven lawyers to travel to different villages one day each week. During their travels, they provide free consultations and court representation to rural Moldovans who cannot afford to consult a lawyer about problems involving employment, family law, land, government benefits and other issues. In December 2006, U.S. Ambassador to Moldova, Michael Kirby, helped celebrate the fifth anniversary of Moldova’s Traveling Lawyer Program by presenting a special certificate of achievement to the program’s first traveling lawyer and saluting other participating lawyers. Ambassador Kirby stressed the importance of the program, which helps ordinary people address important legal issues and fosters confidence in the rule of law.