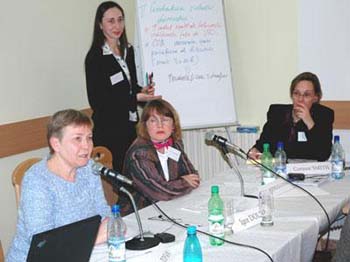 More than 120 people attended the recent launch of the Moldova CEDAW Assessment Tool Report, which measures the degree to which Moldova's laws promote and protect the rights of women as required by the United Nations Convention on the Elimination of all Forms of Discrimination against Women (CEDAW), and the extent to which women are accorded these rights in practice.

Attendees included members of Parliament and the newly-formed government Commission for Equality between Women and Men, as well as representatives from NGOs, international organizations and the media. After the launch, six local experts led an interactive discussion that focused on ways to identify discrimination and stereotypes, overcome barriers to equality in the workforce and address the prevalence of violence against women.

The CEDAW report highlights stark differences between the legal rights accorded women on paper and the rights they enjoy in practice. It expresses particular concern regarding discrimination in the workplace and the justice and health sectors, as well as high levels of family violence. Moldova's new legislation on gender equality and its pending law on domestic violence are promising, but the challenge will be to ensure these laws translate into changes on the ground. It is hoped that the CEDAW Assessment Tool Report will be a catalyst for further advocacy on women's rights issues and a basis for improved cooperation and planning in this domain.

Notably, the Moldova report was the product of excellent collaboration with Winrock International, which conducted much of the field research for the report. Funding was provided by USAID, with additional financial support from OSCE's Mission to Moldova.