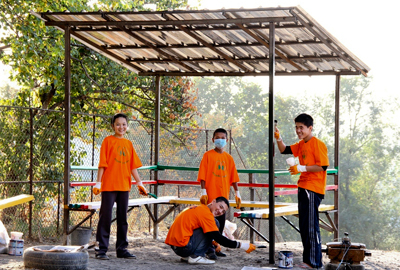 Students who participate in an ABA ROLI-supported street law center assisted with building a playground to improve recreational conditions for children in Yuzhny, Kyrgyzstan.

Gulipa Kozhogulova is a resident of Yuzhny neighborhood in the southern city of Osh, Kyrgyzstan. A retired artist and chair of the Female Council of her neighborhood, she is fully engaged in raising her grandchildren. Her neighborhood is a community of low-income families with some daunting challenges. Over the years, playgrounds, a staple of youth, have been disappearing from the neighborhood, depriving local children of an area to play and fomenting delinquency among them. Gulipa and her neighbors have repeatedly appealed to the local government for help in improving recreational conditions for their children; regrettably, their efforts have proved in vain.

In the fall of 2011, a group of students from the Osh-based street law center, which the ABA Rule of Law Initiative (ABA ROLI) supports, built a playground for the children in Yuzhny. Wearing bright orange tee-shirts with the words “Give a Smile” stamped on them, members of the Osh Street Law Center, working with Gulipa, built a small pavilion with benches, a seesaw and monkey bars. Later, the city government helped the students build a slide and fence the playground.

“This small social project has achieved its goal,” said Ainura Mamazhunus, director of the Osh Street Law Center. “This playground has become a place that unites children coming from different ethnic and social groups, as well as their parents. In a word, we have managed to improve the fragile relations among the residents in that post-conflict area.”

The street law program—through five centers ABA ROLI established across the country in 2001—educates youth about civic responsibility. The Osh initiative is one of 10 similar volunteer initiatives being implemented by street law centers in Osh and Jalalabat, which involve and benefit multi-ethnic communities.

ABA ROLI’s efforts to provide access to justice and civic education to post-conflict communities through the street law centers are supported by the U.S. Embassy in Bishkek. The efforts help build confidence and mutual trust among residents of multi-ethnic neighborhoods.