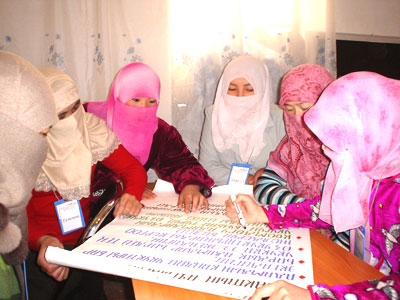 Students in a madrassa in Osh, Kyrgyzstan, learn about citizens’ rights through the Street Law program

Since early childhood, 28 year-old Kanishai Kojoakmatova dreamed of becoming a lawyer. However, her father believed that his young daughter should not study—it was not an appropriate pursuit for a girl.

Ten years after graduation from secondary school in Kyrgyzstan, Kanishai found the chance to continue her education. She could not attend an expensive law university, however, so she enrolled in the more accessible option—a madrassa.

In 2006, when Kanishai came from remote Chon Alai to study in the Islamic University in the city of Osh, she was pleasantly surprised to find that law classes were in fact delivered alongside her religious study.

“Every week in our madrassa we have the We and the Law classes. We learn our rights and how to defend them if they are violated. We also consider different life situations, in which any person can appear, and we learn how to address these problems with the help of the law,” Kanishai states, idenitfying what she likes about the “Street Law” curriculum. “We can easily and freely express our opinions, disagree with each other and discuss different issues.”

The Street Law program, implemented by the American Bar Association’s Rule of Law Initiative (ABA ROLI), is aimed at providing public legal training on the basics of law, human rights and democratic principles. Since 2001, legal training has been delivered in 50 secondary schools of the Kyrgyz Republic, and since 2006, the law classes have also been provided in religious institutions—Islamic schools and madrassas.

Kanishai tries her best to master provisions of the law because she believes that without awareness of one’s own rights and laws one’s life will be very difficult. “Just recently, I helped my nephew to get a passport,” Kanishai recounts, “because I knew which agencies to apply to and what documents should be provided.” She is confident that the knowledge and skills gained will continue to help her in different life situations.

In the near future, Kanishai will move ahead to study the training methodology in the Street Law program, so that she can master the innovative ways of teaching used in the program. She hopes that by gaining trainer’s skills and receiving the certificate, she will herself be able to work as a teacher of law in her village, providing the same interesting classes that she now takes in the madrassa.

“I was not able to become a lawyer, but I have the chance to become a teacher of law,” Kanishai smiles, “and I will put all my efforts…no, I will definitely achieve my goal!”