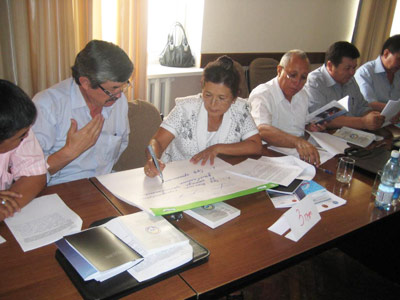 ABA ROLI cooperated with the Supreme Court of Kyrgyzstan to train 167 judges in preparation for the October 10 parliamentary elections.

In Kyrgyzstan, the past year has been defined by traumatic political change and tragic ethnic violence following the ouster of former president Kurmanbek Bakiev. The June 27 constitutional referendum was critical in political reformation, and the upcoming October 10 parliamentary elections are the next major effort.

To address election-related concerns surrounding both events, the ABA Rule of Law Initiative (ABA ROLI) has worked to enhance the legal community’s ability to manage election complaints and to increase public awareness about voters’ rights and voting procedures. Additionally, a website, www.shailoo2010.kg, offers news and information on voter rights and on challenging election irregularities, while a lawyer-staffed hotline has fielded questions prior to and during both the June and October votes. And finally, during the elections, roving legal clinics have been made available to the public and monitors help document election irregularities.

To help prepare the courts, ABA ROLI cooperated with the Supreme Court of Kyrgyzstan to train 167 judges. The chairman of the Central Elections Commission and several Supreme Court judges addressed the specifics of the elections code and shared their insights. ABA ROLI staff attorneys worked with Supreme Court judges to produce a benchbook on deliberating election disputes. The trainings deepened the judges’ understanding of the country’s election codes and promote uniform implementation of the law in a system that does not operate on the basis of precedent.