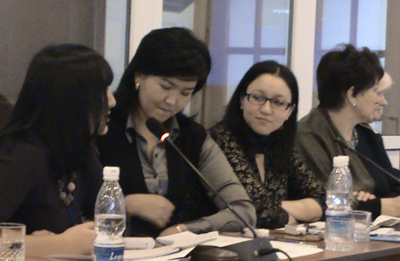 In partnership with the U.S. Department of Justice, Office of Overseas Prosecutorial Development, Assistance, and Training (OPDAT), the ABA Rule ofLaw Initiative (ABA ROLI) recently organized an independent analysis of the Kyrgyz Republic's Criminal Procedure Code by four international experts. The analysis revealed the need for amendments to the Kyrgyz Criminal Procedure Code in orderto comply with the International Covenant on Civil and Political Rights (ICCPR) and other applicable international standards. Criminal procedure code reform is one of several reforms that the Government of Kyrgyzstan has agreed to completeas part of its Threshold Country Plan with the Millennium Challenge Corporation, a U.S. government corporation which works with some of the world'spoorest countries "to reduce global poverty through the promotion ofsustainable economic growth."

On October 18, ABA ROLI's senior criminal law advisor, Mary Greer, together with OPDAT Resident Legal Advisor Nancy Langston, presented the assessment's findings and recommendations in Kyrgyzstan. They met with representatives from the Office of the President of Kyrgyzstan, the Prosecutor General’s Office, theSupreme Court, the Parliament, the Bar Association, and other high level justice actors, and held a roundtable to share the findings.

Brie Allen, legal analyst in ABA ROLI's Research and Assessments Office, together with OPDAT’s Eurasia Regional Director Catherine Newcombe, coordinatedthe assessment. The experts who conducted the analysis were identified jointlyby ABA ROLI and OPDAT, and possess extensive experience on criminal justiceissues in Eastern Europe and the former Soviet Union. The legislativeamendments recommended in the assessment are currently under consideration.