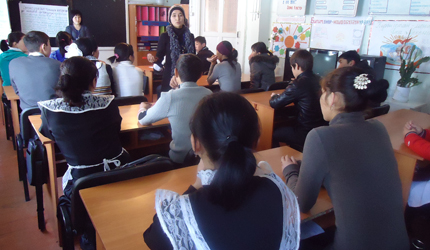 In January, Kyrgyzstan’s Ministry of Education and Science integrated into its national curriculum for ninth graders a post-conflict civic education course the ABA Rule of Law Initiative (ABA ROLI) developed. Since late 2010, ABA ROLI has worked with ethnic Kyrgyz and Uzbek university students to pilot the course at schools throughout the country. The course covers sources of conflict as well as peaceful and constructive conflict resolution methods, such as dialogue, mediation and democratic engagement.

ABA ROLI worked with five street law centers—local non-governmental organizations—to design the course curriculum. During the previous academic year, 80 volunteer university students worked in pairs to teach the pilot course to 1,200 ninth graders at 44 secondary schools throughout the country. In the lead up to the launch—which is now in its second year—ABA ROLI trained the instructors on the pilot course's interactive teaching techniques and youth psychology.

The pilot course was well received by ABA ROLI’s local partners. In the spring of 2011, G.U. Soronkulov, Kyrgyzstan’s deputy minister of education and science at the time, expressed his support for the project. “I am confident that this course can help many young people to think carefully about their values and to resolve their conflicts peacefully,” said Soronkulov, “The Ministry recommends this tutorial for wide use by teachers of secondary schools, schools’ gymnasiums, lyceums and other educational institutions.”

Following the Ministry of Education and Science’s decision to make the course part of its national curriculum, the course was incorporated into the ‘Individual and Society’ class. ABA ROLI—supported by the U.S. Embassy in Bishkek—designed and implemented the course to promote dialogue and peaceful conflict resolution in the wake of the 2010 ethnic violence in Kyrgyzstan.