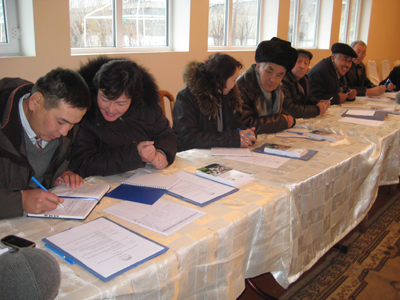 During the defense-advocate protection workshops, lawyers obtained practical advice on how to ensure personal security and integrity if threatened for fulfilling their professional duties.

Since the June 2010 ethnic violence, attorneys in Kyrgyzstan have increasingly become the target of threats and physical attacks for representing politically unpopular defendants. Pressure on advocates by law enforcement officials has become a serious problem, with many advocates having been arrested and suffered premeditated violence.

In response, the ABA Rule of Law Initiative (ABA ROLI) and the Advocates’Training Center (ATC), a local institution that provides continuing legal education (CLE) for practicing lawyers, developed a defense-advocate protection course. As their law training does not prepare advocates for the attacks they have been facing, many of them do not know how to deal with the threats and attacks. The course features practical advice on how lawyers can ensure personal security and integrity if threatened for fulfilling their professional duties. The course is based on the Defense Advocates’ ProtectionManual, a resource ABA ROLI published in August 2011 outlining the government’s responsibility to protect defense attorneys.

Launched in November 2011, the trainings focus on improving advocates’ knowledge of the laws that protect them, the agencies that can address their complaints and available financial and psychological support. So far, a total of 80advocates from the Issyk-kul, Naryn, Osh, Dzalal-Abad and Talas regions have attended three workshops. The U.S. Department of State's Bureau of Narcotics and Law Enforcement Affairs supports the program.