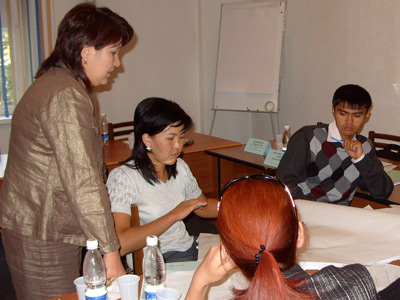 The American Bar Association Rule of Law Initiative (ABA ROLI) recently conducted a day-long training for advocates (criminal defense attorneys) in the Kyrgyz Republic. The September 19 training, which was held at the Judges Training Center of the Supreme Court of the Kyrgyz Republic in Bishkek, was attended by more than 20 advocates.

At the event’s outset, Professor Sahgivaliev A.K., a professor of law at the Kyrgyz Russian Slavonic University and the former director of the Prosecutor’s Training Center, encouraged the advocates to ask questions and to be frank in their comments. Professor Sahgivaliev addressed prison reform issues and his observations and insights were well received by participants. Part of the day was devoted to reviewing recent reforms to the Criminal Procedure Code (CPC).Small groups discussed and analyzed the CPC, and later made recommendations for improving the code based on their professional experiences and the issues they face defending clients.

The day also included a presentation by Nicholas Hentoff, ABA ROLI’s criminal law legal specialist in Kyrgyzstan. Hentoff detailed ABA ROLI’s ongoing efforts to establish a national training center for advocates. Throughout the day, participants uniformly agreed on the necessity of establishing such a training facility. Many noted that both prosecutors and judges in the Kyrgyz Republic benefited from training centers, and that an advocates training center would help level the playing field and bring more fairness to the criminal justice system.