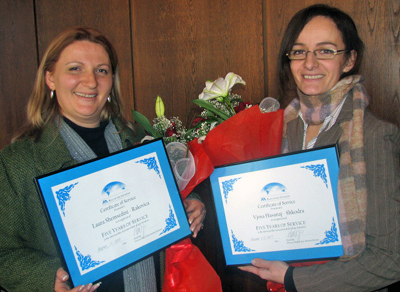 From left to right: Laura Rakovica and Vjosa Shkodra

The American Bar Association Rule of Law Initiative (ABA ROLI) recognized staff members Laura Rakovica and Vjosa Shkodra for their five years of service to the organization as it promotes the rule of law in Kosovo. Laura and Vjosa both joined ABA ROLI on April 8, 2002. Since then, both have grown in their positions taking the lead on very important projects implemented by ABA ROLI in Kosovo.

When she first joined ABA ROLI, Laura worked on production of the cumulative annual index of all legal materials promulgated in Kosovo by UNMIK. Moving on from this, Laura spent her time on the Public Awareness Program, arranging student court visits in the different regions of Kosovo. Besides those two responsibilities, she took the lead in managing four significant publications: “We don’t vote, but we have rights,” a book on children’s rights based on the European Convention on Exercise of Children’s Rights; “The Manual for School Committee,” a manual to guide high school committees toward better organization; “Poetry,” a book of poems written by high school students regarding children’s rights; and the most recent book and project, TeenLaw, a “Street Law” style course targeted to high school students on human rights, law, and the judicial system in Kosovo.

Vjosa Shkodra has pursued important projects of her own as part of ABA ROLI in Kosovo. She started by organizing legal profession reform trainings and helping Kosovo’s attorneys in developing their professional skills. Next, she dealt with projects supporting the Kosovo Chamber of Advocates (KCA) such as the “Project on Ethics and Disciplinary Measures.”  In addition, she has helped law students in Kosovo pursue their Praktikant experience in attorney’s offices. Finally, she has worked on the Legal Clinic Project, which after a number of years is now part of the regular curriculum of the University of Pristina Law Faculty.

Vjosa and Laura have embodied the three main qualities of dedicated service during their five years with ABA ROLI: Clear impact and concrete results, healthy cooperation with stakeholders involved in all projects, and excellent team work. They are both looking forward to supporting ABA ROLI’s projects in Kosovo for years to come.