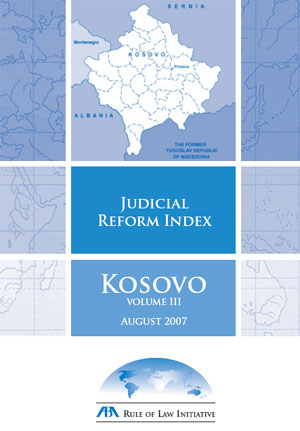 Both Mr. Kelmendi and Ms. Fritz praised the role of the JRI in highlighting the progress of reforms and the challenges that remain for the Kosovo judiciary. Of the 30 factors measured by the JRI, 6 rated positive, 12 rated negative, and 12 rated neutral. Overall, the ratings for 7 factors improved since the publication of the second volume of the Kosovo JRI in 2004. Among the improvements discussed in the Kosovo JRI are the transfer ofpower to independent judicial authorities and the adoption of a new Judicia lEthics Code. Three factors—measuring the quality of judicial buildings, judicial advancement criteria, and the creation of judicial positions—demonstrateda decline since 2004. In addition to these three growing concerns, the Kosovo JRI reflects the judiciary’s continuing lack of economic resources, resultingin decaying infrastructure, case backlogs, staff shortages, and low judicial salaries. Kosovo’s rapidly evolving political status has also created difficulties related to judicial tenure and the passage of conflicting legislation.

The assessment team for the Kosovo JRI was lead by the Honorable Evelyn B.Lance. The full text of Volume III of the Kosovo JRI is available in English, Albanian, and Serbian: