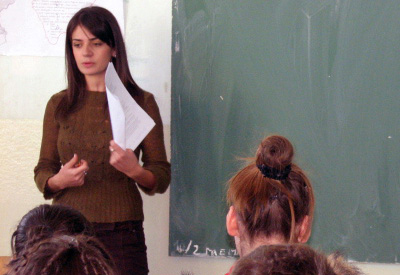 A University of Pristina law student introduces teens to legal concepts in one of Pristina's high schools.

Ten law students, all of whom completed the ABA Rule of Law Initiative (ABA ROLI)Legal Clinic at the University of Pristina law school in Kosovo, are now teaching “TeenLaw” for high school students in five different regions of Kosovo.

TeenLaw is a course which introduces information about the Kosovo legal system to high school students. ABA ROLI first introduced TeenLaw to Kosovo high schools in May 2007.  Since then, the course has reached some 1,500 high school students in Kosovo. Among the subjects covered by the Teen Law course are the court structure in Kosovo; the meaning of laws; the role of advocates, prosecutors and judges in society; and human rights.

The TeenLaw project fills a gap in the high school civics curriculum, which does not cover the judicial and legal systems. The project also increases public awareness and dialogue about law and its role in society, there by encouraging the democratic foundations of the rule of law. Additionally, theproject encourages debate among high school students and equips former law students with better communications and public relations skills.

Isa Gacaferri, a law student who has been lecturing at a high school in Mitrovica, explained that teaching TeenLaw solidified his own legal education. High schoolers often asked challenging questions, “thus lecturing them made me understand those topics even better,” he said.

TeenLaw lectures will continue in all Kosovo regions until the end of 2007. For more information, please contact Laura Berger, Program Officer for Kosovo and Serbia bergerl@staff.abanet.org.