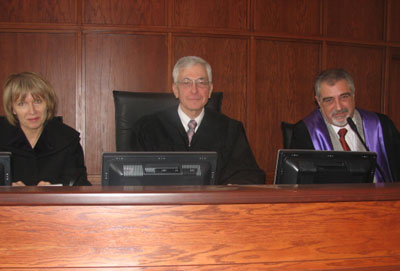 In January 2008, students in the ABA Rule of Law Initiative’s (ABA ROLI)Simulation Clinic in Pristina, Kosovo, attended a real trial hearing at their newly inaugurated moot court facility. Second instance international judgeTimothy Baland of the District Court of Pristina decided to have the appellate hearing in the new student courtroom so that law students could attend and observe.

The new courtroom and offices at the Law Faculty of the University of Pristina, since opening in October 2007, have already been used by students to observe and work with actual clients on real cases, but this was the first time a real hearing was held there. The facility is being used by, among otherclasses, the simulation clinics, which ABA ROLI has supported since 2005, andby a trial advocacy class and new live-client clinic, implemented by ABA ROLI and supported by OPDAT.

Fatime Xhelili, a third-year law student, said that “the hearing was very important because it gave a different perspective than what we have learned from the books and theory. It gave us a glimpse of what a real trial case looks like.”  Students were able to ask questions after the appellate trial.They learned how attorneys file their appeals, the role of the prosecutor, and the role of the international judicial panel, among other things.

Judge Baland promised that in next couple of weeks other trial cases will beheld at the courtroom and students will get to learn more from those hearings.

Being able to observe and discuss actual cases at the student courtroom meets one of the primary goals of ABA ROLI: helping students gain practical skills needed to become practicing lawyers.