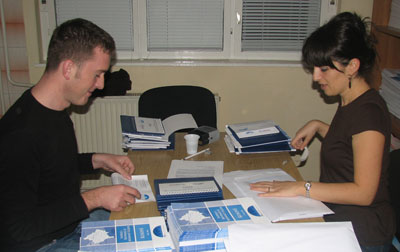 Outstanding students from the University of Pristina’s Law Faculty received book awards for their efforts in two courses—legal methodology and legal ethics & professional responsibility. The classes were developed in partnershipwith professors from the law school.

The book award, a copy of The Nature of Judicial Process by Benjamin Cordozo, was presented by the ABA Rule of Law Initiative’s legaleducation specialist in Kosovo, Professor Emeritus Jack Van Doren. Professor Van Doren made the presentations in honor of their excellent performance. Blerta Rafuna and Fatime Xhelili received the award for their work in legalmethodology and Jeton Koca and Bujare Shala were honored for their efforts inthe ethics and professional responsibility course. The students said they were especially happy to receive the book awards because of the shortage of academicbooks in Kosovo’s libraries and bookstores.

ABA ROLI has been working to promote the rule of law in Kosovo since 1998.To celebrate its 10 years of work in the country, ABA ROLI’s offices in Kosovo published a 2009 calendar for its partners. The calendar features 12 stories and photos highlighting some of ABA ROLI’s achievements in Kosovo.