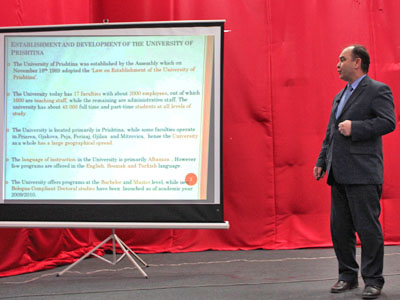 Bajram Berisha, Vice Rector of Teaching and Research at the University of Pristina, discussing the history of education reform at the university.

The launch event included panel discussions that featured representatives from a variety of the country’s higher education institutions, including the Kosovo Accreditation Agency, the University of Pristina Law Faculty and Iliria College. About 40 people, including students and representatives from KCA, UnitedNations Development Program, Kosovo Private Enterprise Program and the Constitutional Court attended the event.

Gina Schaar, ABA ROLI country director in Kosovo, presented the assessment’s major findings. Schaar said that while there still are some areas of concern tolegal educators, the overall findings reflect tentative but concrete progress in Kosovo’s legal education system. Schaar said that some of the areas of concern included professional and legal ethics, corruption in the examinationand grading process, low graduation rates, inadequate technical capabilities of law faculties and libraries, a lack of digital records and large class sizes.

“We see progress in a number of areas, which is the result of hard work of education institutions. These improvements should be congratulated,” said Jennifer Ober of the U.S. Agency for International Development (USAID) missionin Kosovo, “At the same time, the LERI also tells us that while reform has continued, much is left to be done.”

Since the first LERI was conducted in Kosovo in 2008, the higher education system has made significant strides toward compliance withinternational standards of legal education, including the Bologna Process. Additionally, the quality of private law schools has improved since an accreditation process was introduced in 2009.

The event was widely covered by all major local media, print and electronic. ABA ROLI’s legal professional development program in Kosovo is supported by the USAID.

To learn more about our work in Kosovo, contact the ABA Rule of Law Initiative at <rol@americanbar.org>.