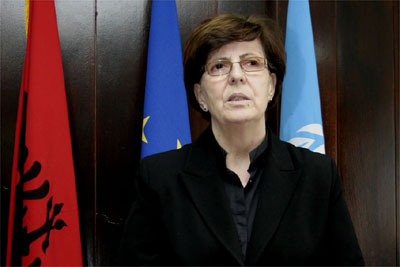 An interview with Nekibe Kelmendi, Kosovo’s new, and first female,Minister of Justice

Ms.  Nekibe Kelmendi is not only the first woman attorney in Kosovo since 1974; she was also the first Secretary General of the Kosovo Chamber of Advocates (KCA), for four years since 1987; a judge for six years since 1968; co-chair of DOJ with the United Nations Mission in Kosovo from 2000 to 2001; an MP for two mandates; and finally, the first woman to become Kosovo’s Minister of Justice.

Sitting in the new government building office, Ms. Kelmendi discusses with the ABA Rule of Law Initiative (ABA ROLI) the issues she believes are important to the sector where she took the lead in January 2008.

Q: What is the Ministry’s main priority to be addressed to improve the legal profession in the country?

Kelmendi: In the months to come, our main focus will be drafting laws that come out of the Ahtisaari Plan, a plan that determines Kosovo’s legal and political status. The Ministry’s involvement in other areas will be limited due to our heavy participation in completing this necessary new package of draft laws. However, I’d like to stress here that the Ministry of Justice willsupport the KCA and legal professionals. I recognize the need to support this profession and the importance that legal professionals have in enforcing therule of law in the country.

Q:  In the next three years, one of ABA ROLI’s projects is to develop a regulatory bar for attorneys in Kosovo. What will the Ministry’s rolebe?

Kelmendi: That’s an excellent development for Kosovo’s Bar. It’s very important that the Kosovo Chamber of Advocates takes its regulatory role as all other bar organizations overseas. Although KCA members have been already represented in highly important institutions, such as the Committee fordrafting Kosovo’s Constitution and the Committee on Bar Exam, I’d like toassure you that the Ministry is determined to have a sustainable involvement ofKCA members in all regulatory institutions as mentioned above.

Q: You’ve been part of the KCA, for years. What would you recommend tothis institution for their future work?

Kelmendi: I admire KCA’s and KJA’s strategic plan in fighting corruption.This is what is needed the most and they’ll have our support on that. In addition, I believe that sooner or later I’ll bring to the government’s agendathe issue of KCA being the only licensing body for Kosovo attorneys. I willstop the unauthorized practice of law, a category of legal professionals who have finished the law faculty and who may not have taken the bar exam and still perform attorneys’ job. I’m aware that this is a KCA request as well. Finally,as a woman in law I’d like to see KCA bring in more incentives for women to practice this profession.