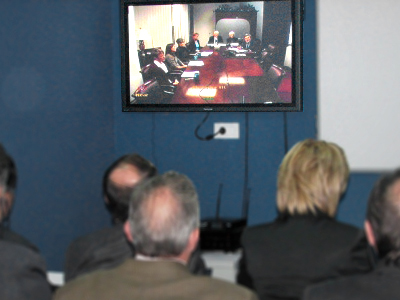 The American Bar Association Rule of Law Initiative (ABA ROLI) gaveat torneys and lay people in Kosovo a rare glimpse into a mock disciplinary hearing held by the New Mexico Disciplinary Board on October 17, 2007. Thevideoconference event was the first training for the newly appointed members ofthe Kosovo Chamber of Advocates’ (KCA) disciplinary committees to witness first-hand how a disciplinary system functions in general, and to hear advicefrom their counterparts in New Mexico. The exchange of these experiences continues the extensive work by ABA ROLI to help the KCA better implement itsrecently drafted Code of Ethics and revamp its disciplinary system.

Because of many changes to KCA’s administration, training of the individuals tasked with implementing these changes is crucial.  For the first time in KCA’s history, its disciplinary panels include lay members. A new client relations committee has also been introduced to field complaints. As such, thevideoconference with New Mexico gave people in Kosovo the chance to experiencejudicial administration in the United States. Kosovo attorney Tome Gashistated, “This is an excellent experience for us to get to know how oversees disciplinary systems work,”

About 20 members of the Kosovo Chamber of Advocates disciplinary bodies attended this conference and were engaged in the discussion that followed. Former ABA ROLI Legal Specialist Doug Francis assisted in organizing the conference on the New Mexico end.

ABA ROLI and USAID provide technical advice and legal expertise to the KCA Ethics and Discipline Committee in Kosovo.  ABA ROLI advised the body earlier this year on updating and revising the Code of Professional Ethics (“Code of Ethics”) for Lawyers and the KCA disciplinary system. The revised Code and updated disciplinary system were adopted by the Chamber in June 2007.