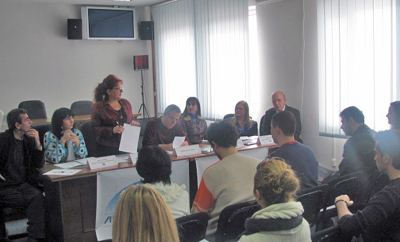 Serb law students from the northern town of Mitrovica are introduced to the Kosovo Legal System.

Over the past year, the ABA Rule of Law Initiative (ABA ROLI) has been working with the Kosovo Chamber of Advocates (KCA) Commission on Women and Minorities to encourage and recruit minority lawyers, including lawyers fromKosovo’s Serbian population.  As part of this effort, ABA ROLI hosted arecent seminar, funded by the US Agency for International Development, for students from the Serbian law faculty in the northern town of Mitrovica. The seminar, titled “An Introduction to the Kosovo Legal System,” was met with great enthusiasm.

The university in Mitrovica houses the Serbian faculties of the University of Pristina, which were relocated there in 1999. Serb law graduates of the faculty in Mitrovica are not exposed to Kosovo criminal or civil procedure during their studies, nor do they learn the intricacies of Kosovo legal system as their counter parts do in Pristina.

To counter this divisive pattern, ABA ROLI worked with the KCA to develop a half-day program which included speakers from the Kosovo bar and bench, andcovered topics such as qualifications for the bar exam, registration procedures for advocates, application procedure for judges, and the structure of the court system in Kosovo. Should participants choose to work in the legal system in Kosovo, the program gives them the practical tools to do so.

Based on the success of these preliminary seminars and meetings, more programs, including court visits and civil and criminal procedure classes, are being planned.