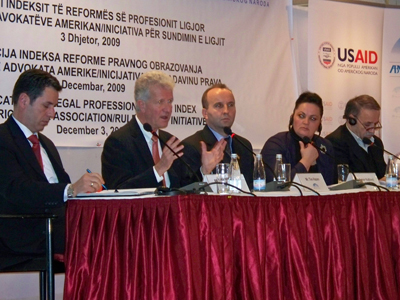 During the November 2009 roll-out of the Kosovo Legal Profession Reform Index, a panel discusses the bar examination, licensing procedures and continuing legal education.

The publication, which is an extensive assessment of progress towardsestablishing a more ethical, effective and independent legal profession, evaluates the current state of reform in Kosovo by analyzing 24 different aspects (or factors) of the legal profession. It also compares the current findings to findings of similar assessments implemented in the country in 2004 and in 2007.

The report found that Kosovo’s legal system—and the condition of its legal professionals—is rapidly evolving. The strengthening and increased independence of institutions such as the Kosovo Chamber of Advocates (KCA) have benefitedlawyers. Positive developments such as the passage of a new law on legal aid have also played a role.

However, the report found that a number of concerns persist and that some new problems—including a backlogged and poorly functioning judicial system, corruption and the suspension of bar examinations since January 2008—havedeveloped.

The full text of the 2009 Kosovo Legal Profession Reform Index is available online in Albanian, Serbian and English.

To learn more about our work in Kosovo, contact the ABA Rule of LawInitiative at <rol@staff.abanet.org>.