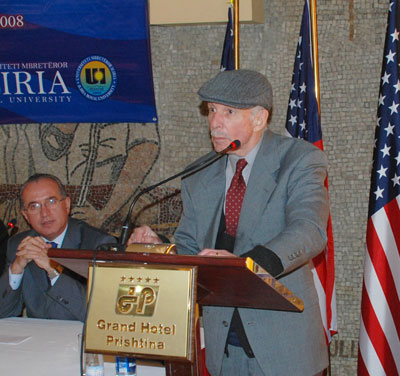 The event celebrates American culture during the American Thanksgiving holiday season. The event was held from November 24–27 and included a series of concerts, debates and meetings throughout the city of Pristina.

Professor Van Doren spoke at the opening ceremony. A professor emeritus from Florida State University College of Law and a graduate of Harvard College and Yale Law School, Prof. Van Doren has taught law for more than 38 years. Prof. VanDoren spoke about constitutionalism in the U.S., and issues such as separationof power and the bill of rights. His wealth of expertise as a legal expert, both at home and at many posts abroad, proved valuable as he offered comparative comments on the U.S. and the newly-created Kosovo constitutions.