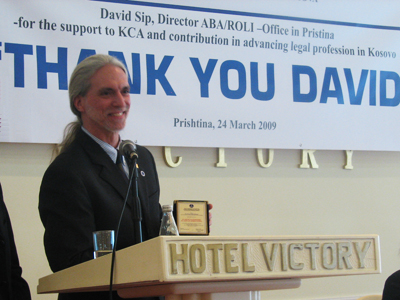 The Kosovo Chamber of Advocates (KCA) organized an event acknowledging Sip’s work, which was attended by more than 30 KCA members, president of the Kosovo Judges Association and dean of the University of Pristina Law Faculty.

“While working on the law on the bar, it was David that would show up first to our board meetings and it was him that would leave last,” said Musa Dragusha, the president of the KCA, “His commitment encouraged us all to work harder and to believe in success.”

Ymer Huruglica, president of the KJA, said the ABA ROLI and Sip were supportive of his association from its inception.

“David will remain a great friend to our legal community,” said Hava Ismajli, dean of the University of Pristina Law Faculty.