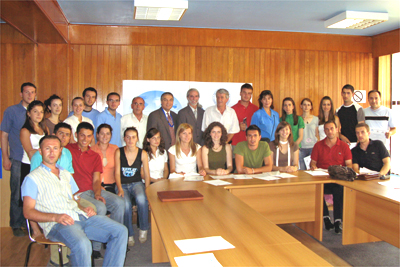 This time the semester ended with the students conducting several mock trials in Pristina District Court.  The trials were observed by representatives of the United States Agency for International Development (USAID), the Rule ofLaw Initiative in Kosovo, Law Faculty members, and practicing experts. Thefirst trial was covered by a national television station, which emphasized the faculty’s move toward reform and incorporating practical skill-building courses into the curriculum.

The Criminal Section of the legal clinic conducted mock trials in two criminal cases: the first, a murder case—where the students played the roles ofall the parties involved including a panel of judges, advocates and prosecutors, the principal defendant accused of murdering his girlfriend, andtwo co-perpetrators who were hiding the facts (the panel of judges sentencedall three defendants to imprisonment); the second, a theft case involving ajuvenile who, according to the testimony, broke a car and stole a radio fromthe damaged party who caught him in action.

The Civil Section of the clinic conducted three cases. The first case was a property dispute where a claimant won his right to own the disputed propertybased on the statute of limitation. In the second case involving permission tomarry a minor, the judges, after hearing the arguments of both parties and the parents, concluded that the couple did not meet the conditions of entering intomarriage. And the last, a divorce and child-custody hearing, was held after theprior attempt for reconciliation had not worked. The couple with two childrenwere divorced, and the father received custody of the children lied with thefather since his financial situation was more sound than the mother’s, among other reasons.