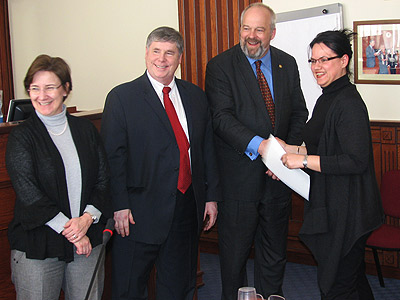 The National Institute of Trial Advocacy (NITA) offered trainings in March,April and June to boost the trial skills of judges, prosecutors, lawyers and recent law graduates.

The ABA Rule of Law Initiative (ABA ROLI) and the U.S. Department of Justice cooperated in hosting the three-day NITA trainings. The third NITA training, which addressed direct and cross examinations as well as closing arguments, was attended by 30 lawyers and prosecutors, including 13 defense attorneys invitedby ABA ROLI.

Hamijete Miftari, a Kosovo Chamber of Advocates (KCA) member from the city of Peja, asserted that the skills she and her colleagues learned were helpful for their career. She said the session which discussed the importance of body language and closing arguments in court was interesting to her, highlighting areas that need special focus and attention. The lawyers said similar trainingswould enhance judges’ flexibility in accepting new trial forms.

Participants received certificates of participation and the trainers chose10 of them to take part in a follow up training in San Francisco in the U.S. Four lawyers, including the KCA president, will be certified as NITA trainers.