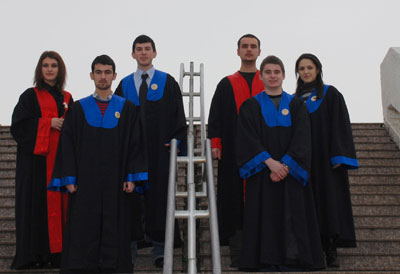 On January 16, the president of Kosovo, the Kosovo minister of justice, and more than 500 people joined the ABA Rule of Law Initiative (ABA ROLI) to celebrate Law Day. ABA ROLI Country Director David Sip moderated the ceremony, held at the Youth Center Red Hall. Mr. Sip said it is important to help the Kosovo people understand the role of the rule of law and the role of lawyers, judges, prosecutors and the court system. He said the challenge is to help the people understand “how the law protects their freedoms, and to strengthen their allegiance to it and increase their confidence in the court system.” Speakers during the opening ceremony included: Kosovo President Fatmir Sejdiu, Minister of Justice Nekibe Kelmendi, the U.S. Agency for International Development’s(USAID’s) Kosovo Director Patricia Rader, President of the Supreme Court and ofKosovo Judicial Council Rexhep Haxhimusa and EULEX Deputy Head of Justice Bernard Rabatel. They stressed the fundamental role of the rule of law in strengthening the justice system.

“Kosovo, as a new independent and sovereign state, will be an important partner in promoting the highest values that help realization of justice,” said President Sejdiu “January 16th will be celebrated as Law Day, recapitulating the work and analysis we have done, but it will also be a working day so we can catch up with processes and days by gone”.

USAID Mission Director Patricia Rader echoed the president’s commitment adding, “This day should serve as a continuation of our engagement and commitment for building a justice system based on the rule of law”.

Following the ceremony, several law students engaged in a mock trial, which provided the audience an opportunity to witness the functions and roles of acourt procedure. ABA ROLI also organized a justice fair in which 15 local andinternational organizations working for justice reform in Kosovo took part. Thefair provided a forum for organizations to speak with the general public about their programs and services. After participating in the fair, lawyers from the Kosovo Chamber of Advocates and legal officers from the Legal Aid Commission offered free legal assistance.

ABA ROLI first introduced the idea for Law Day in January 2007. The purpose of Law Day is to educate the public on the achievements of the legal system, to highlight the new constitution, and to recognize and celebrate the progress inthe rule of law. The day’s events were organized and supported by ABA ROLI and USAID, in collaboration with the Kosovo Chamber of Advocates, Kosovo JudgesAssociation and the Ministry of Justice. January 16th was chosen to honor there-establishment of the country’s justice system through the swearing in of judges and prosecutors in the Pristina region on January 16, 2000. Minister Kelmendi said, “From now on, all of us and the generations to come will celebrate the Law Day with the intention to keep the justice open; let’s open the justice and close the ruling of injustice.”