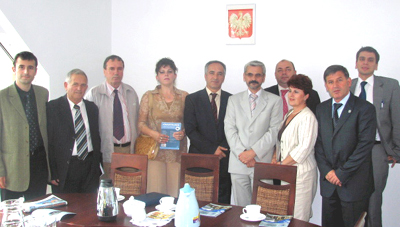 The study visit of a Kosovo Judges Association (KJA) delegation to Poland, sponsored by a United States Agency for International Development (USAID) training project and implemented through World Learning, took place from June 24 to 29,2007.  The KJA was represented by its top leadership—Mr. Ymer Huruglica,KJA President; Mr. Zait Xhemajli, Supreme Court Justice, Ms. Elmaze Syka, KJA Vice-President; Sebahate Kurtishi, KJA Secretary; Mr. Ymer Hoxha, Member of the KJA Managing Board; and Mr. Halil Derguti, Minor Offense Court Judge in Mitrovica.  During the study visit, the KJA wished to learn sustainability strategies and ways to engage in effective lobbying and advocacy.  The KJA delegation was hosted by two major Polish judicial associations— the Polish Judges Association “Lustitia” and the Foundation for Rule of Law of Poland.  Justice Teresa Romer, Polish Supreme Court and President of “Lustitia” received the KJA delegation from the very first day of the visit and accompanied them throughout their tour.

The KJA delegation was introduced to Lustitia and the Foundation for Rule of Law through briefings during the first day.  Like the KJA, Lustitia is a nonprofit voluntary membership organization.

The delegation had the opportunity to attend and observe a trial hearing at a District/Regional Court of Warsaw.  According to KJA representatives this observation gave them a unique opportunity to learn how Polish courts operate.  The court visit was followed by a visit to the Polish National Judicial Council, which is the equivalent of the Kosovo Judicial Council. The Kosovo judges also toured the Supreme Court of Poland, hosted by Justice Romer.

Sessions later in the week included an introduction to financial and funding issues of Lustitia, and an introduction to the publication and advocacy activities of Lustitia.  These were of particular interest to the Kosovo judges.  Judge Barbara Rymaszevska, editor-in-chief of Lustitia’s newsletter, briefed the delegation about this publication.  The current newsletter began with support from the Rule of Law Initiative in Poland in 1994 and since then it has been published quarterly without interruption.