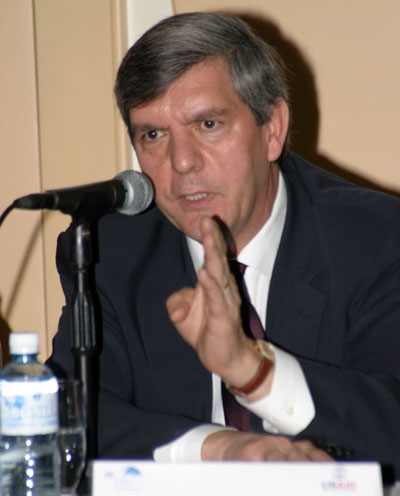 Michael Greco, former American Bar Association president and partner at K& L Gates LLP, was recently interviewed by the Metropolitan Corporate Counsel about his visit to Kosovo and his work with the ABA Rule of Law Initiative (ABA ROLI).

The three-page article highlights the reform process underway in Kosovo and Greco’s commitment to the rule of law worldwide. Mr. Greco’s June 2008 visit to Kosovo was marked by meetings with Kosovo government officials, judges, bar association members, leaders in the legal profession, law educators and lawstudents. At the invitation of the Kosovo Chamber of Advocates (KCA) and the Kosovo Judicial Institute, he addressed the Kosovo legal community and highlighted issues of corruption in the Kosovo justice system, the importance of legal ethics codes, and legal education reform.

Greco said members of the legal community should fight corruption to promote the rule of law in Kosovo.

“With respect to Kosovo, my message to the assembled lawyers, judges andeducators was direct: ‘Now that you have declared independence and have adopted a new constitution, you have the Kosovo justice system and its future, and thetrust of all Kosovo citizens in your hands. You must take this opportunity toinstill the rule of law in Kosovo, and the first step is to eradicate corruption at every level of the justice system.’”

ABA ROLI, which has been active in Kosovo since 1999, implements legal technical assistance focusing on legal education and legal profession reforms. It has also been instrumental in anti-corruption efforts by assisting Kosovo legal professionals to adopt a code of ethics, and by encouraging transparency and accountability at all levels of the legal system.

The Metropolitan Corporate Counsel is a monthly publication distributed to corporate counsels, law firms and legal service providers. Thefull interview can be accessed at: http://www.metrocorpcounsel.com/current.php?artType=view&EntryNo=8845

To learn more about our work in Kosovo, please contact ABA ROLI at <rol@staff.abanet.org>.