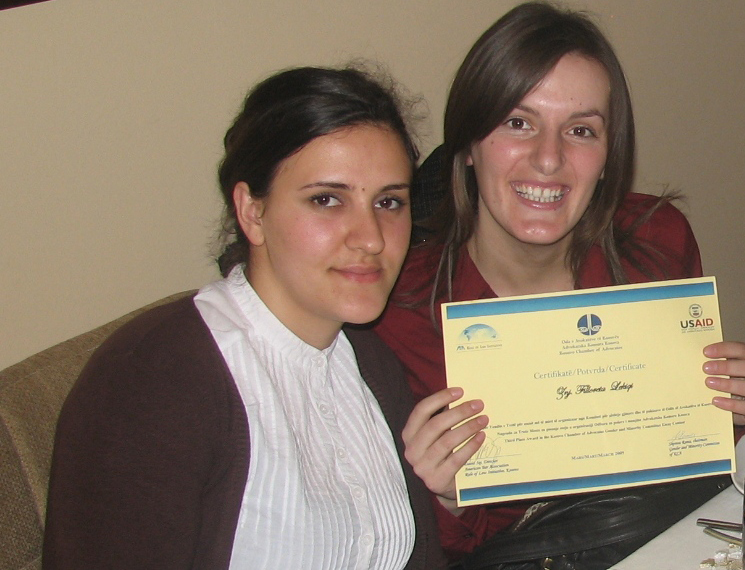 Winners of the contest received scholarship.

Winners of the women and minority law student essay contest organized by the ABA Rule of Law Initiative (ABA ROLI) and the Gender & Minorities Committee of the Kosovo Chamber of Advocates (KCA) received scholarship.

The contest is a joint ABA ROLI-KCA initiative to encourage the recruitment, retention and advancement of women and minorities into the legal profession. The call for essays was announced last December. Six students submitted their essays, which were judged by the KCA Executive Board-appointed committee. The committee, including a judge, a lawyer and the Law Faculty dean, evaluated theessays. Fanushe Haliti won first place, with Teuta Kadriu and Filloreta Lekiqi standing second and third, respectively.

ABA ROLI organized an award ceremony dinner on March 5, where the KCA awarded prizes to the winners and certificates of participation to the rest of the contenders. Winners received an award of €200, €150 and €100, respectively. Ms. Shpresa Rama, chair of the Gender & Minority Committee, presented the awards and certificates. The first place winner’s essay will be published in the KCA bulletin.

“This is one of the projects that KCA is implementing for increasing the participation and membership of women and minorities in the KCA,” said Ms.Rama. She added that the contest will be an annual KCA event. Haliti said that the contest was a great opportunity for law students. She said that the prize she won will encourage her to further dedicate herself to the legal profession.