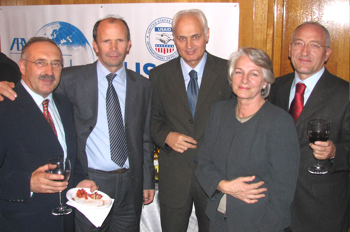 Kosovo government authorities recently increased ex-officio lawyers’ monthlyfee for their services from 250 EURO to 500 EURO - doubling the original feeamount.  This decision follows significant pressure mounted by Kosovojudges and lawyers both individually and through their membershiporganizations, the Kosovo Chamber of Advocates (KCA) and the Kosovo JudgesAssociation (KJA).  The goal was to secure decent compensation forex-officio lawyers for their legal services.

The issue of low fees for ex-officio lawyers was initially discussed in a"bench-bar" roundtable that was held in Mitrovica in January, one ofa series of bench-bar roundtables to take place in Kosovo from December 2005 toJanuary 2007.  The roundtables were sponsored by the Kosovo JudgesAssociation (KJA) and the Kosovo Chamber of Advocates (KCA), in partnershipwith the ABA Rule of Law Initiative and US Agency for International Development(USAID). The Rule of Law Initiative provided the technical and professionalassistance and USAID provided funding.

During the Mitrovica roundtable, both lawyers and judges agreed that themonthly fee of 250 EURO that the government provided to ex-officio lawyers wasa major obstacle to providing proper legal representation to court-appointedparties.  Participants pointed out that the fee was too low to motivatelawyers to engage in serious and professional representation of ex-officioclients.

To persuade the appropriate government bodies to take the issue of low feesfor ex-officio lawyers with due seriousness, the KCA and KJA launched a dualcampaign.  KCA leadership took the issue up directly with the appropriateauthorities.  Judges, meanwhile, published the recommendation for higherfees, along with other conclusions of the bench-bar roundtables, in the KJABulletin, a quarterly newsletter of the Kosovo Judges Association.  TheKJA Bulletin is distributed to all KJA members and KJA partners, includinggovernment institutions.  The approach of the KCA and KJA brought the issueof ex-officio lawyers’ fees needed visibility and attention from theappropriate UN Mission in Kosovo (UNMIK) and government bodies.

There is a shared belief that the increased fees will motivate ex-officiolawyers to provide higher quality services to their clients, which in turn,will lead to increased confidence in the legal profession.