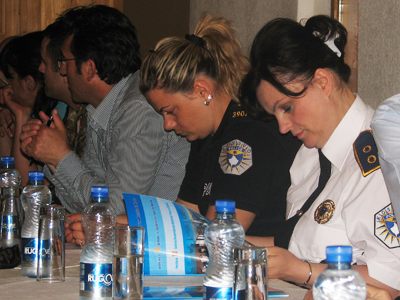 After a four-month assessment of the implementation of Kosovo’s family law,a Gjakova-based women’s association found that courts were operating inaccordance with the law. During a May 14 roundtable, 35 participants discussed the findings.

“We closely followed the procedures during court sessions, while concentrating on their efficiency, quality of proceedings, legal deadlines, law application in practice, etc. and we didn’t notice any irregularities,” saidValbona Rizvanolli. The association monitored 35 cases—12 cases in the Municipal Court of Gjakova, 15 cases in the Municipal Court of Deçan, fourcases in Peja’s District Court and four cases in Safe House in Gjakova. Thecases included 16 domestic violence, 10 child custody, four alimony, fourparent verification and one inheritance cases.

“It is the obligation of all of us, institutions and civil society, to do our best for building a democratic and functional society,” said Haxhiu. Other roundtable participants included municipal and district court judges, locallawyers, police, and representatives of the social work center. The participants called for more discussions. The local TV station, Syri, and journalists from daily newspapers covered the event.

To learn more about our work in Kosovo, contact the ABA Rule of Law Initiative at <rol@staff.abanet.org