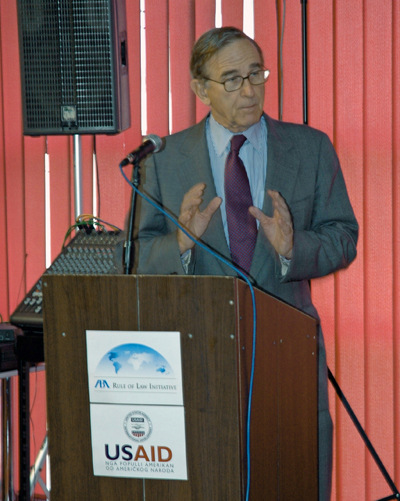 Hon. John M. Walker, Jr. addresses the conference on the causes and global reach of corruption

At an October 2007 conference organized by the American Bar Association Ruleof Law Initiative (ABA ROLI), Kosovo’s three main judicial organizations launched a landmark joint anti-corruption strategy. The Kosovo Chamber of Advocates(KCA), the Kosovo Judges Association (KJA) and the Kosovo Prosecutors Association (KPA) worked together on the  Strategy for a Transparent andNon-Corrupt Judicial System through a six-month grant by Advocacy Training and Resource Center (ATRC). The culmination of this effort holds great potential for reducing corruption in the region.

The conference first targeted the causes of corruption. Judge John M.Walker, Jr., Senior Judge on the U.S. Court of Appeals for the Second Circuit discussed a number of factors contributing to corruption in Kosovo. He pointedto “the lack of transparency, low salaries (lowest in the region), a lack ofwell trained judges, and the lack of clear rules and lines of responsibilities.”  He also observed that corruption is a global issue andthat every judiciary in the world  should be vigilant in dealing with it.