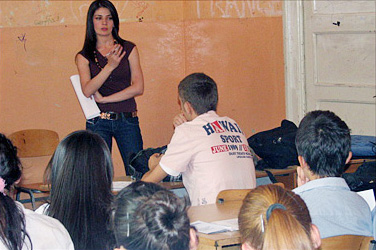 On May 9, the Rule of Law Initiative in Kosovo rolled out its TeenLaw pilot program, a course that introduces Kosovo's legal system to local highschool students. With the support of the Kosovo Ministry of Education and the University of Pristina Law Faculty, the Rule of Law Initiative arranged for students from the law faculty to teach tenth graders ata Pristina high school about Kosovo’s court system.

The Rule of Law Initiative developed the program with the aim of filling a gap in the high school civics curriculum in Kosovo, which does not cover the judicial and legal systems, as well as to increase public awareness and dialogue about law and its role in society.  The pilot program proved a success judging by the vigorous questioning and debate from the students on issues as diverse as the influence of politics on the court system, corruption,and the function of parallel courts in Kosovo. The program also received positive feedback from the civics teacher and ministry officials who observed the classes.

The Rule of Law Initiative developed the content of the course through consultations with the Law Faculty and education officials.  The ABA plans to expand the pilot program in the Fall to cover more topics and more students, and eventually incorporate TeenLaw into the high school curriculum.