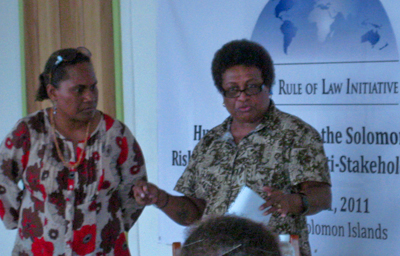 From August 8–11, the ABA Rule of Law Initiative (ABA ROLI) hosted a workshop in Honiara, Solomon Islands, addressing the risks and challenges of human trafficking in the country and identifying multi-stakeholder solutions. The workshop, which builds upon previous trainings, was organized to increase awareness of human trafficking and to strengthen coordination among key actors.

This year, the annual U.S. Department of State report on human trafficking listed the Solomon Islands under the tier two watch list. If a country remains on the tier two watch list for three consecutive years, it is automatically downgraded to tier three, the U.S Department of State’s lowest ranking. In his opening remarks, Bryan Hunt, deputy chief of mission at the United States Embassy in Papua New Guinea, said that the Solomon Islands needs to take proactive steps to prevent and address human trafficking to protect human rights and promote economic development. About 35 participants—representatives from government agencies, civil society groups and the legal community—discussed their experiences and the potential for various organizations to coordinate efforts to better prevent the crime, protect survivors and prosecute perpetrators.

Sister Doreen Awaiasi of the Christian Care Center (CCC), which provides one of the few safe houses to women and children survivors of domestic violence and human trafficking, said, “Human trafficking is real and it happens in the Solomon Islands.” She recounted that she and the CCC have documented cases of trafficking in boys and girls, aged 6–13, near logging camps in remote regions of the country.

Participants concluded the workshop by identifying key challenges and opportunities, adopting a statement of purpose and developing a coordinated action plan for prevention, protection and prosecution. The statement and action plan emphasize the need for collecting more data, raising public awareness, establishing referral networks for survivors and strengthening legal frameworks. The workshop received daily press coverage, including an editorial in the Solomon Star, the primary national newspaper, which called on the government to do more to prevent and combat human trafficking. Supported by the U.S. Department of State’s Office to Monitor and Combat Trafficking in Persons, ABA ROLI’s program in the Solomon Islands aims to strengthen national anti-human trafficking legislation and build local capacity to address the crime.

To learn more about our work in the Solomon Islands, contact the ABA Rule of Law Initiative at rol@americanbar.org.