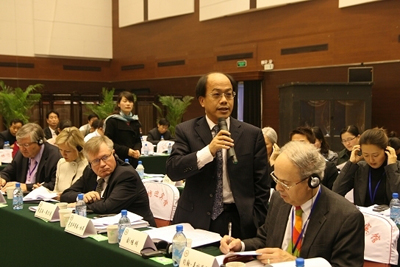 A participant poses a question to expert panelists during a November 2009 symposium on mediation in Langfang, China.

From November 5–6, the ABA Rule of Law Initiative (ABA ROLI), the University of Massachusetts’ John W. McCormack Graduate School of Policy Studies and the Massachusetts Judges Conference, in cooperation with the Chinese Academy of Social Sciences and the Langfang Intermediate Court, conducted a symposium exploring the use of court-based mediation.

More than 130 participants—including more than 50 senior judges from intermediate and district courts in Hebei and Shandong provinces, law professors from China’s top universities and senior members of China’s procuratorate—attended the symposium in Langfang, China.

Chinese experts presented on China’s experience with mediation, with a special focus on Hebei and Shandong provinces, whereas foreign experts presented on the experiences of the United States, Germany and Australia. Presenters and participants discussed the merits and potential risks of court-based mediation and issues surrounding the standardization and institutionalization of mediation.

The symposium allowed practitioners, judges and scholars from across China, along with their foreign counterparts, to discuss some of the most pressing alternative dispute resolution issues. Discussions covered the role of lawyers in mediation, the types of cases that lend themselves to resolution through mediation, the role of mediation in criminal cases, the value of mediation both to parties in a case and to society, and balancing efficiency and justice.

Foreign experts included Judge Cratsley of the Massachusetts Superior Court and Judge Hillman of the Federal District Court of Massachusetts, who provided detailed information on court-based mediation in the United States and highlighted the need for greater regulation of mediation. Jim McGuire, a representative from a mediation firm, described the historical evolution of mediation in the United States, while Christian Duve, partner at Freshfields Bruckhaus Deringe Law Firm, presented on mediation in the European Union and Germany. Nadja Alexander, law professor at City University of Hong Kong and honorary research fellow at the Mandela Institute of South Africa, discussed the role of judges in mediation in various countries. Chinese experts discussed those issues in the context of China, sharing their views on enforcement of mediation agreements and on whether or not a judge who mediates a case and fails to reach a settlement should be prohibited from trying the case.

After the symposium, participants visited two district courts, in Anci and Guangyang districts, to learn more about their unique experiences with mediation and measures they have taken to further develop court-based and non-court-based mediation. Participants said the visit provided them with rich materials for future research, revealing opportunities for strengthening relations and for greater information sharing between academics and courts.

This program is part of a U.S. Agency for International Development-funded initiative to improve the quality of justice in China through enhanced judicial education. It supports technical assistance for reforms in the areas of evidence discovery, mediation and court-community relations.