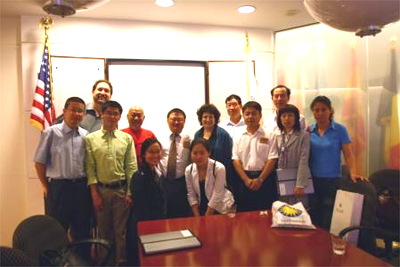 Participants in the Initiative’s U.S.–China Environmental Exchange Project meet with U.S. EPA officials in Washington, DC before beginning month-long periods of residency at American federal and state environmental protection agencies and NGOs in June and July 2007.

From the moment they stepped off the plane on June 17, 2007, in Washington, DC, Chinese environmental officials and advocates marveled at the clear air and blue skies overhead.  “I knew that the U.S. had good environmental protection, but I didn’t realize just how far China still has to go,” said Xi’an Environmental Protection Bureau (EPB) official John Qi.

Director Qi and his nine colleagues were in the United States to participate in the Rule of Law Initiative’s Exchange Project to Increase Citizen Participation, Accountability, & Transparency in Environmental Decision-Making in China, co-sponsored by China’s State Environmental Protection Administration (SEPA).  The participants included two SEPA officials, five provincial and municipal EPB officials from Xi’an, Shenyang, Wuhan, and Guizhou, one NGO leader from Chongqing, one judge on the Supreme People’s Court, and one environmental lawyer from Beijing.

The core of the exchange program consisted of month-long periods of residency during June and July 2007 in American environmental agencies and NGOs. Exchange participants worked alongside their American counterparts in daily planning and implementation of activities to promote civic participation, information transparency, and environmental good governance.  Following an orientation in DC where the delegation met with U.S. government agencies, think tanks, and civil society groups, the participants dispersed to organizations around the country, including U.S. EPA Region 5 in Chicago and Madison, U.S. EPA Region 9 in San Francisco, the California EPA, the California Energy Commission, the Sierra Club, and the Natural Resources Defense Council (NRDC) in DC and New York.

As part of their periods in residency, two exchange participants, Tang Shaohua of Wuhan EPB and Wu Dengming of Chongqing Green Volunteers, took part in the California Environment Dialogue.  “What left a deep impression,” said Director Tang, “was that government officials, NGO leaders, and businesspeople all participated as equals in the dialogue.”  He and Mr. Wu both returned to China with plans to create similar dialogues around environmental issues in their cities, which are located along China’s Yangtze River.

The expansive and important role of civil society participation in environmental protection in the U.S. left a similarly strong impression on other participants.  Peng Bin of Guizhou Provincial EPB, who was in residency at EPA region 5, was particularly struck by the significant role of environmental lawyers, both inside and outside of government.  Chinese attorney Xia Jun, who was in residence at NRDC, was impressed by the many facets of American environmental lawyers’ work, including litigation, lobbying and public education.  Mr. Xia has already reached an agreement with Mr. Wu on the Chongqing environmental NGO to engage in deeper collaboration between his law firm and the NGO back in China.

The participants kept on-line journals and photos of their experiences in the U.S., which are available at http://www.chinaeol.net/zmhj/default_en.asp (English translations) and http://www.chinaeol.net/zmhj/xwdt.htm (Chinese). They will submit a collective report to China’s SEPA leaders on their observations and recommendations from the exchange, and the next issue of China’s World Environment magazine will feature their stories and case studies on public participation in environmental protection in the United States.  The next phase of the exchange project will take place in China, as representatives from the American host organizations will spend periods in residence at their counterpart Chinese environmental organizations, and all participants will serve as trainers in a Rule of Law Initative & SEPA-organized national workshop on implementing environmental public participation.