In May, the ABA Rule of Law Initiative (ABA ROLI) and the China University of Political Science and Law hosted a four-day training on enhancing judicial skills in handling domestic violence cases. The intensive training, which was attended by nearly 30 judges and judicial administrators from criminal courts around the country, was the first opportunity of its kind for criminal-court personnel. The sessions were designed to increase participants’ understanding of the dynamics and effects of domestic violence, as well as new criminal procedures—including the use of protection orders— that can better protect victims. 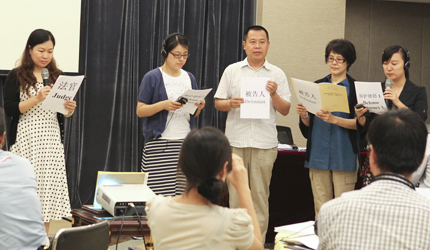 The training employed role-playing activities and addressed several topics, including victim and perpetrator behavior, as well as the effects of domestic violence on families and children.

Jerry Bowles, a judge from the Kentucky Family Court, and Cindy Dyer, a former prosecutor and former director of the U.S. Department of Justice’s Office on Violence against Women, facilitated the training. Bowles and Dyer worked with ABA ROLI and Chinese legal experts to design a training curriculum that suits local application. The interactive training employed video clips, role-playing activities, and small- and large-group discussions. It addressed several topics, including victim and perpetrator behavior, the effects of domestic violence on families and children, evidential considerations and conditions of release.

The May training was well received by participants. “In my court, we deal with tens of thousands of criminal cases every year,” said a criminal court judge from Beijing. “If I can just change the approach of 10 colleagues, the impact on domestic violence cases would be immense.”

The training was followed by a two-day international conference in June. A total of 50 legal actors, including judges, prosecutors, defense lawyers, expert witnesses and academics from China, Taiwan and the United States, attended the conference, which allowed participants to share experiences on how criminal domestic-violence cases are handled in their respective justice systems. Bowles and Dyer gave a series of presentations on how domestic violence cases are handled by judges and prosecutors in the United States. They discussed the importance of protection orders, the use of witnesses and testimony, and the professional responsibilities of a prosecutor. Several experts from Taiwan provided insight into the Taiwanese approach to anti-domestic violence legislation and procedures for handling the testimony of minors. Chinese presenters shared their experiences in handling domestic violence cases.

A 2004 study by the Guttmacher Institute found that more than one-third of Chinese households are affected by domestic violence. However, the use of judicial orders to protect domestic-violence victims is relatively new in the country. Since 2008, ABA ROLI has been supporting local efforts to pilot a civil protection-order system. ABA ROLI has developed and provided trainings for civil judges and lawyers. Protection orders in civil domestic-violence cases were piloted in nine courts in 2008, and they have since been implemented in more than 200 courts. To build upon the success in civil courts, ABA ROLI and the Supreme People’s Court of China coordinated to expand the trainings into the criminal court system.

To learn more about our work in China, contact the ABA Rule of Law Initiative at rol@americanbar.org.