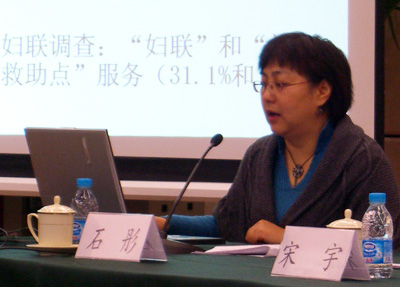 Professor Shi Tong of the China Women’s University, who led the study, presents study findings at the Anti-DV Networks’ Annual Meeting in December.

The findings indicate that the majority of survivors rely primarily on informal channels, such as family and friends, for support after an instance of abuse occurs. When formal channels are utilized by survivors, they most often look to local branches of the Women’s Federation (29%), with police stations (20%) and local governmental village and neighborhood committees (18%) also offering a significant source of assistance. Seventy-five percent (75%) of women who sought help through formal channels report receiving some form of assistance; however, the study also indicates that abused women have relatively low expectations for outside organizations and the assistance they can offer.

Respondents also reported that, while formal organizations are relatively effective at providing emotional support, concrete needs—such as medical services, emergency housing, monetary support and legal assistance to begin divorce proceedings and to assist with custody issues—remain largely unmet. Support organizations can use the study results to better tailor their services and to more effectively implement improvement efforts to the benefit of domestic violence survivors.

Next steps for this program include police trainings, which will be held throughout the country, on effective methods of police intervention in domestic violence cases.