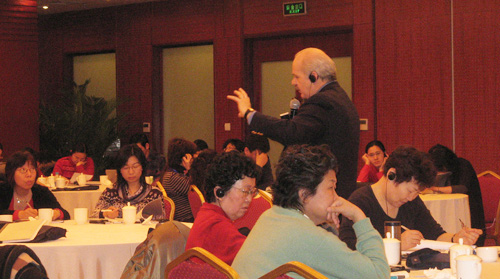 The ABA Rule of Law Initiative (ABA ROLI) and the China Anti-Domestic Violence Network trained more than 100 police officers and anti-domestic violence advocates from 18 Chinese cities about police response to domestic violence. The two training programs, which were held between February 12 and 15, were followed by a police-trainers’ training on February 16. The trainings focused on concrete skills police can employ in responding to domestic violence calls.

One of the trainees said that the program provided practical skills for controlling a domestic violence scene, separating the parties, comforting victims, conducting interviews and collecting court-admissible evidence. Another participant said, “I now understand that police can intervene in domestic violence.”

Police officers and judges from those cities approved to issue protection orders attended the February 12–13 training, which addressed police’s role in enforcing protection orders. It was an opportunity for the police to talk directly with judges and to better understand the legal force of the protection orders as well as the courts’ expectations from them.

Police and anti-domestic violence advocates from cities striving to increase interagency cooperation in supporting and serving domestic violence victims attended the February 14–15 training. The training focused on community-wide domestic violence intervention and the role of the police within this broader context. Mark Wynn and Ruth Montgomery, leading police trainers and anti-domestic violence experts from the U.S. and Canada, respectively, and Valerie Wynn, director of the Mary Parrish Center for Victims of Domestic and Sexual Violence in Nashville, Tennessee, conducted the trainings. Participants took part in interactive exercises exploring the practical challenges officers face in dealing with domestic violence in China and in North America, allowing them to identify ways to improve police intervention. They agreed that there was a need for intervening earlier and for taking a more detailed approach to gathering evidence, including victim, perpetrator and witness statements, as well as scene photographs and notes.

The training gave the police participants a new perspective on interacting with victims. Many said the training helped them realize that they should ask, “What happened?” and “How did it happen?” rather than “Why did he hit you?” and “What did you do wrong?”

“In talking with a woman who had been beaten, my habit was to ask why she had been beaten and to consider whether the abuse was a result of something she had done wrong,” said a trainee, “Now, I realize that this is a backward way of thinking reflecting feudal attitudes that treat women as inferior to men and that still haunt our thinking.”

A selected group from the February 12–15 trainings attended the February 16 training for future police trainers. They, along with ABA ROLI and international experts, analyzed the training techniques used in the preceding sessions and designed new curricula.

“Now, we have training frameworks for each of the topics we chose, which are very valuable,” said a participant, “We’ve learned how to think about teaching goals, targets, content, strategies, evaluation, follow-up, teaching methods and format.”

The trainings have already led to an increased commitment to similar trainings. Among the participants were members of the Hunan Provincial Police, which has, as a result, decided to include a domestic violence session in a province-wide police training program in May. ABA ROLI will continue to support the trainings by partnering with the Hunan Provincial Women’s Federation. It will also train judges on the adjudication of domestic violence protection orders.