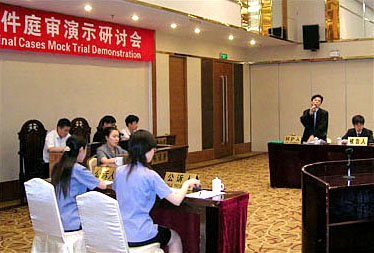 On May 25-26, the Rule of Law Initiative, in conjunction with New York University Law School, China People’s University Center for Criminal Procedure and System Reform, and Xiamen University Law School co-sponsored a mock trial demonstration in Xiamen City, Fujian Province to highlight reforms being considered as part of China’s revision of its Criminal Procedure Law.  The event brought together over ninety participants representing Fujian provincial judges, prosecutors and defense attorneys, as well as leaders from the national-level judicial and legislative branches.

The mock trial demonstrated proposed reforms such as permitting defendants and defense attorneys to be seated together, regularizing procedures and establishing a uniform standard for the exclusion of illegally-obtained evidence, compelling the appearance and testimony of police officers and other witnesses, clarifying the availability of cross-examination, establishing standards for assessing a defendants’ mental competency, and separating the guilt and sentencing phases of a criminal trial.

Judge Margaret McKeown of the U.S. Court of Appeals for the Ninth Circuit and other U.S. law scholars provided a comparative perspective on the issues raised.  By employing practical demonstration as a vehicle for discussion of the impact of proposed reforms on Chinese criminal trial procedure, the exercise made concrete the mostly academic debate surrounding the reforms, and provided a unique opportunity for dialogue among China’s court leaders, U.S. legal experts, and the local-level judges and legal professionals who are the ultimate implementers of reform.