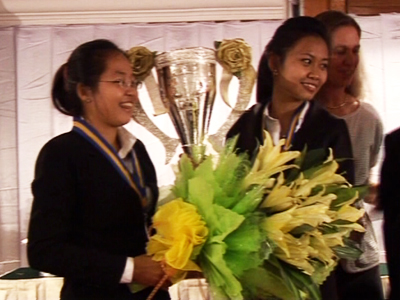 A team from the Royal University of Law and Economics in Cambodia reached the semi-finals of the 2009 International Client Counseling Competition, a prestigious international law student tournament held in the Las Vegas, Nevada, in April.

The team, sponsored by the ABA Rule of Law Initiative (ABA ROLI), finished better in the English-language competition than teams from Canada, New Zealand, Finland, Hong Kong and Scotland, among other countries. Tan Tepi Kanika, 20,and Theng Tith Maria, 19, made the Cambodian team. This was the second yearCambodia was represented in the international competition.

“It was a great opportunity to meet students from all over the world and toshare thoughts about our studies and experiences,” said Maria.

The four-day competition placed teams in a simulated legal office, with actors posing as clients and a panel of legal experts judging the students’ performance. The University of Nevada hosted the competition where 19 countries were represented.

In late January, Kanika and Maria finished first among 20 students from sixschools in the ABA ROLI-organized national client counseling competition in Cambodia, enabling them to represent the nation in the international competition. ABA ROLI organized the Cambodian competition and supported the winning team’s travel to the U.S. helping to boost the practical legal skills of all participating students.

“It was a terrific experience,” said Kanika. “I hope to participate in more international competitions like this in the future.”

The competition is part of ABA ROLI’s legal education reform work in Cambodia. In Cambodia, ABA ROLI works in partnership with East-West Management Institute and its programs are funded by the U.S. Agency for International Development.