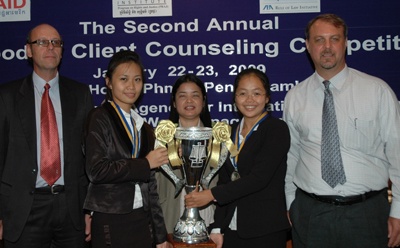 The winning team poses with their trophy.

The competition places teams of law students in a simulated law office environment where they are challenged to conduct a counseling session with anactor posing as their client. Their performances were evaluated by local and international judges. The students learned to employ important legal skills,such as active listening, interrogation, empathy, issue spotting, legal analysis, problem solving and teamwork. The students worked with local lawyersto prepare for the competition and ABA ROLI helped prepare the students byconducting a client counseling workshop in December 2008.

On the second day of the competition, the general public was invited towatch the finalist teams compete for the prize. The United States Ambassador toCambodia Carol A. Rodley, the Director of the United States Agency for International Development Mission Erin Soto and the President of the Bar Association of the Kingdom of Cambodia Chiv Song Hak presided over the awardceremony. A team from the Royal University of Law and Economics won thenational championship while Pannasastra University of Cambodia, NortonUniversity and another Royal University of Law and Economics team stood second,third and fourth, respectively.

With its growing popularity, the program has been recognized as an effective example of the creative and exciting methods used to teach law students thosepractical skills that are not being addressed in Cambodian schools. These skills will prepare the students to become more effective advocates.

ABA ROLI’s Legal Education Advisor Steven Austermiller organized the event. ABA ROLI in Cambodia works as a sub grantee to the East-West Management Institute under the second phase of the United States Agency for International Development-funded program on rights and justice.