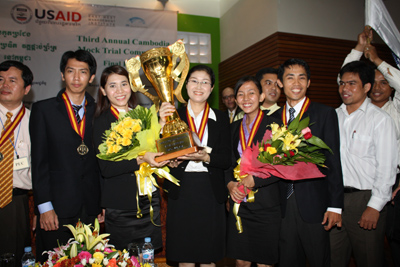 The team from Paññāsāstra University is crowned national champion at the award ceremony.

In late May, teams from seven Cambodian law schools participated in thethird annual national mock trial competition, which was sponsored by the ABA Rule of Law Initiative (ABA ROLI) and co-hosted by PaññāsāstraUniversity and the Royal University of Law and Economics (RULE). The competition was held in the country’s only model courtroom, which ABA ROLI renovated in 2007.

Chiv Songhak, president of the Cambodian Bar Association, made remarks during the opening ceremony. Students played the roles of attorneys and witnesses in a fictitious civil case involving land sale dispute. A panel ofthree judges Reed Aeschliman from the U.S. Agency for International Development (USAID), James Turpin from the United Nations and Tan Senarong, aCambodian judge from Kandal Province Court and the Khmer Rouge War Crimes Tribunal presided over the final trial, which was won by the Paññāsāstra University team.

The competition is part of the USAID’s Program on Rights and Justice, which is implemented by East-West Management Institute and ABA ROLI.