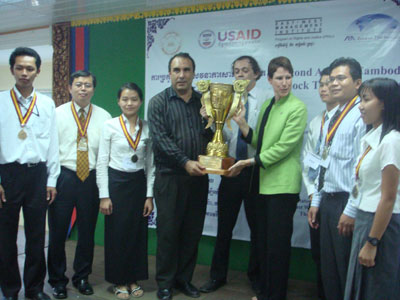 U.S. Embassy official Piper Campbell and the winning mock trial team from Pannasastra University pose for pictures with the trophy.

On September 3–5, the ABA Rule of Law Initiative’s (ABA ROLI’s) Cambodia program hosted its second annual mock trial competition at the University of Cambodia in Phnom Penh. The competition featured teams from five Cambodian law schools, each competing for the honor of being crowned national champion. The students performed as defense attorneys, witnesses and prosecutors in a case involving a stolen purse. The teams presented their casesto a panel that included local Cambodian judges and international lawyers.

More than 200 people from the legal, judicial and law school community watched the trials. The event received local media coverage, including in the Phnom Penh Post and on Radio Free Asia. Dr. Angus D. Munro, vice president of the University of Cambodia, and Piper Campbell, chargé d’affaires, at the American Embassy, announced that the team from Pannasasta University of Cambodia had won the competition.

ABA ROLI works in Cambodia as a subgrantee to the East-West Management Institute, under the USAID-funded Program on Rights and Justice.