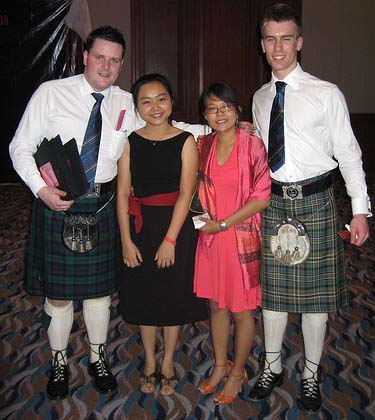 The Cambodian team poses with the Scotland team after the competition.

The competition featured teams from 18 countries (including the U.S., England, Australia, India, Sri Lanka, Malaysia, Hong Kong, and Russia) and two observer teams (Puerto Rico and Cayman Islands) and totaled more than 100 participants. The competition places teams of law students in a simulated law office environment where they are challenged to conduct a counseling session with a “client” that is played by an actor. Their performances were scored by international judges. The students learned to employ important practical legal skills such as active listening, interrogation, empathy, issue spotting, legal analysis, problem solving and teamwork. This year, the team from Northern Ireland was the winner and the team from Russia was runner up.

In India, the Cambodia team participated in the first two rounds. In the first round, Cambodia was up against Hong Kong and Scotland. The judges were very impressed with the Cambodian performance and Cambodia finished second in that group behind Scotland and ahead of the Hong Kong team. In the second round, the Cambodian team was up against two of the strongest teams, team USA and the eventual champions, Northern Ireland. The Cambodian team finished third in that group, but it was an excellent opportunity for the students to compete against some of the brightest law students in the world.

On the final day of competition, the Cambodian team had the opportunity to watch three semi-final and three final round performances from the various countries. This was another invaluable experience that will help them in their future efforts.

The Client Counseling Competition is part of the PRAJ Legal Education Program in Cambodia. The program focuses partly on assistance to law schools. The competition is an example of the creative and exciting new methods used to teach law students important practical skills that are not being effectively taught in Cambodian law schools. These skills will make for more effective advocates in the Cambodian justice system.

ABA ROLI works in Cambodia as a subgrantee to the East-West Management Institute, under the USAID-funded Program on Rights and Justice.