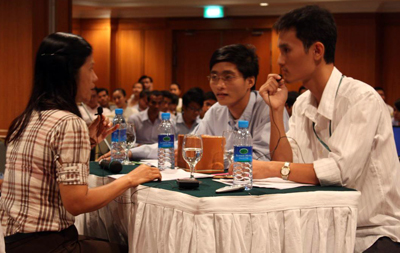 Participants of the client counseling competition interacting with an actor posing as a client.

A team from the Royal University of Law and Economics won Cambodia’s third annual client counseling competition (CCC). The competition was held from January 28–29 in Phnom Penh, with 12 teams from eight Cambodian law schools taking part. The competition organized by the ABA Rule of Law Initiative (ABA ROLI), East-West Management Institute and the Bar Association of the Kingdom of Cambodia and supported by the U.S. Agency for International Development was held at the Sunway Hotel. More than 200 law students, professors and members of the legal community and the media attended the competition and the award ceremony. ABA ROLI Legal Education Advisor Steven Austermiller developed the competition.

Local and international lawyers served as judges for the competition, which challenged the participating teams to counsel an actor posing as a client in asimulated law office environment. The students learned to employ importantpractical legal skills such as active listening, interviewing, empathy, issuespotting, legal analysis, problem solving and teamwork.

Carol Rodley, U.S. ambassador to Cambodia, and Chiv Song Hak, president ofthe Bar Association of the Kingdom of Cambodia, presided over the award ceremony. The two-member winning team, accompanied by a coach and a national representative, will represent Cambodia in the upcoming international client counseling competition, which will be held at the University of Hong Kong fromApril 7–10.

The CCC is part of ABA ROLI’s legal education reform program in Cambodia and focuses on boosting students’ practical skills.