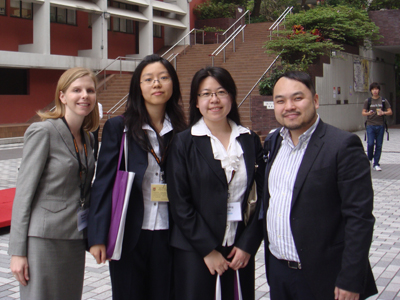 From April 7–10, teams representing 22 countries from around the world competed in the Louis M. Brown International Client Counseling Competition inHong Kong. Launched in 1985, the competition seeks to promote greater knowledge and interest among law students in client counseling and to enhance students’ skills in engaging clients.The competition encourages students to developinterviewing, planning and analytical skills instrumental to developing lawyer-client relationships and to responding effectively to clients’ non-legal needs.

The ABA Rule of Law Initiative (ABA ROLI) offices in Cambodia and China helped prepare teams from each country for the competition, which simulates alaw office interview, with an actor posing as a prospective client. ABA ROLI’s China program, the Beijing Lawyer’s Association, and the Beijing and Hong Kongoffices of Mayer Brown JSM worked together to select and coach the mainland China team, which participated in the competition for the first time. Zhang Huiying, a graduate of Minzu University of China, and Liu Jianing, a graduateof the China University of Political Science and Law and Deakin University in Australia, were selected.

ABA ROLI’s Cambodia program and the East-West Management Institute worked under the U.S. Agency for International Development’s Program on Rights andJustice II, in cooperation with the Bar Association of the Kingdom of Cambodia,to host Cambodia’s third annual client counseling competition. Twelve teamsfrom eight law schools participated in the January 28–29 competition in Phnom Penh. More than 200 law students, professors and members of the legal community attended the competition. The winners of the competition, Theng TithMaria and Tan Tepikanika from the Royal University of Law and Economics, represented Cambodia in Hong Kong.

In both China and Cambodia, participants prepared for the competition byworking with practicing attorneys. Also, in December 2009, ABA ROLI’s Cambodiaprogram conducted a client counseling workshop, which was attended by about 200 students and law professors.

Attorneys at the Beijing and Hong Kong offices of Mayer Brown JSM, along with ABA ROLI China staff, worked closely with the members of the China team toprepare them for the substantive, analytical and communicative aspects of the international competition.

Both the Cambodian and the Chinese teams had stellar performances at the competition, with the Cambodian team advancing to the semi-final round and theChinese team tying for the last semi-final spot but failing to make it past a tie-breaking procedure. The New Zealand team won first place, the England andWales team won second, while the U.S. team came in third.

Members of the Cambodian and Chinese teams said that the experience taught them how to be better, more effective attorneys and how to better serve theirclients.

To learn more about our work in Cambodia and China, contact the ABA Ruleof Law Initiative at rol@staff.abanet.org.