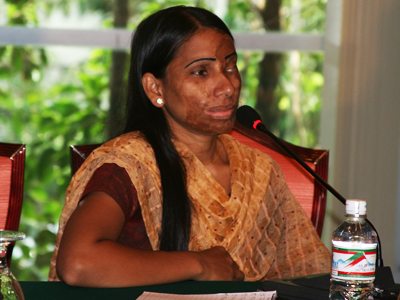 A courageous acid attack survivor provides a first-hand account of her horrific attack.

On May 30, ABA ROLI supported a Women Entrepreneur Association of Bangladesh(WEAB)-hosted roundtable focused on addressing gender-based violence (GBV) through community involvement. The roundtable, which brought together keyactors and stakeholders, was intended to gather insight and advice on identifying,training and deploying community volunteers to better tackle GBV, particularlyin rural areas of Bangladesh.

The event was attended by academics, human rights attorneys, members ofparliament, police representatives, GBV survivors and representatives fromnon-governmental organizations (NGOs). The WEAB president and the ABA ROLIcountry director, Chris Hardaway, provided welcoming remarks. ABA ROLI Program Officer Cynthia Farid and a Dhaka-based attorney heavily involved in GBV cases served as moderators for the roundtable. Each of the participants offered a different perspective on the issue of GBV in Bangladesh and methods for combating it.

In introducing ABA ROLI, Heather Variava, deputy chief of political andeconomic affairs at the U.S. Embassy in Dhaka, noted that the U.S. government supports initiatives to decrease violence against women in Bangladesh,including those that promote respect for women’s rights and enhance women’s awareness of the options available to them.

One participant, an acid attack survivor representing the Acid Survivors ’Foundation, was a reminder of the critical need to address GBV. She provided afirst-hand account of the horrendous trauma that survivors face. She said shewas in seventh grade when a man in her village proposed to marry her. Her father refused the proposal, wanting her to continue her education. The spurnedsuitor reacted to the rejection by throwing acid into her face, maiming her forlife. While the perpetrator was ultimately jailed for 33 years, the legal process was filled with obstacles, including corrupt law enforcement and prosecutors.

Saber Hossain Chowdhury, a parliament member who is sponsoring GBV legislation that, if passed, will provide protective orders for victims, emphasized the need for such legislation and the importance of strengthening local government to promote community-level actions. Also focusing on community engagement, Ashraful Huda, former police inspector general, highlighted theneed for active police participation in eliminating violence against women. Hesaid it was important to educate entire communities, especially the generally poorer and less literate rural communities, about women's rights.

Another parliament member, Dr. Shirin Sharmin, stated that violence against women, which takes many forms, including wife abuse, sexual harassment, rape and economic deprivation, was on the rise in Bangladesh. She said that the majorityof GBV victims cannot pursue needed remedies because they would not be able to support themselves or their children if they were to leave an abusive husband. Access to justice is also an issue. A participant explained that the average cost of pursuing a GBV case from first report to court house proceedings isaround 22,700 taka ($328 USD) an often prohibitive sum.

Dr. Sharmin also noted that, while many organizations offer assistance towomen, they are not sufficient to protect them from ongoing threats andcultural pressures. A representative of Odhikar, a prominent Bangladeshi human rights NGO, described that, despite abuse, many women arereluctant to break up their homes. Many file GBV cases, only to later withdraw them because of threats or the cultural need to save face in their communities.These contextual challenges thus intensify women’s difficulties. For example, according to Dhaka attorney Tania Amir, the relatively high rate of unnaturaldeaths among housewives is often overlooked by authorities; such occurrences are traditionally considered private household matters. To help gain community allies, several participants suggested involving teachers, imams, health workers and local government officials in efforts to combat GBV.

Local media also expressed interest in the event. Two newspapers, the English-language Daily Star and the Bangla-language Junagtor each carried articles on the roundtable, while local newscasts also mentioned the program.

The ABA Rule of Law Initiative (ABA ROLI), with funding from the U.S.Department of State, began its Bangladesh women’s rights programming in March2009. The program is built upon successful ABA ROLI initiatives in other countries and focuses on training and deploying community volunteers andlawyers to identify and work with GBV survivors. These efforts will be supported by an extensive educational outreach effort.

To learn more about our work in Bangladesh, contact the ABA Rule of Law Initiative at <rol@staff.abanet.org>.